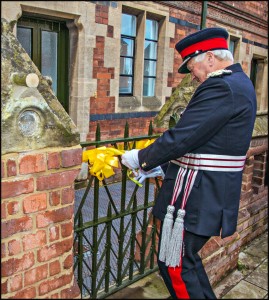 On Tuesday 21st October 2014 the Trustees of Sir Robert Christopher’s Almshouses Charity were excited to hold the Official Opening of the newly refurbished and extended Almshouses in West Street, Alford, Lincolnshire. This ceremony was performed by HM Lord Lieutenant of Lincolnshire Mr. Tony Worth, who was assisted by the Rev. Ros Latham and Rev Phillip Greetham who offered prayers and a Blessing of the Building, for all those associated with the works and the future occupants.

The Chairman of the Trustees, David Wood, welcomed the assembled crowd of 80 supporters, who had braved the tail end of the hurricane to attend the ceremony, and assured them that they could all transfer to Alford Manor House immediately after the ceremony where they would be entertained to lunch.

The completion of the works is the culmination of a long and sometimes difficult process.

Sir Robert Christopher had extensive land holdings in East Lincolnshire and at the time of his death in 1668 was living in Alford Manor House – where those attending the Opening Ceremony were entertained to lunch 346 years later.

In his will, Sir Robert, directed that –

‘Item out of my charitable disposition to the town of Alford 550li (£550) to lay out a park there, in the building of an Almshouse in the West Field there, and the remainder of the said 550li shall be bestowed in purchasing and setting up of lands of inheritance for the perpetual maintaining of six poor people.’

Elizabeth, Lady Sherad, the daughter of Sir Robert , carried out his wishes and had the original almshouse built in 1670, most probably of ‘mud and stud’ construction so typical of East Lincolnshire, these original buildings lasted until 1870 when The Rt. Hon. Mary Bruce Christopher-Nisbet-Hamilton had the present brick and slate building erected.

Historically, weekly maintenance contributions from the many almspersons had been set too low and thus been insufficient to accumulate funds to maintain the properties to modern standards. With this need for modernisation and to carry out long overdue major building maintenance becoming more and more pressing as the houses became vacant and un-tenable the current band of trustees, in 2007, appointed an architect and surveyor to work with them in preparing a Scheme for repair, improvement, renovation and extension of the Almshouse properties.

After long and difficult negotiations with the local Planning Authority, Graham P. Cook, our architect, was delighted that we were granted full Planning Permission and Listed Building Consent in April 2010.

With the help of Reuben Saffer, who we appointed as our Project Manager, we had applied for the Homes and Communities Grant Scheme for the 2008-2011 cycle but were unsuccessful with our bid. However, with encouragement from Reuben Saffer, we submitted a bid for the 2011-2015 cycle of the Homes and Communities Agency grant scheme in May 2011 which was successful and we were awarded £200,000. This grant offer was conditional and led to us being one of twelve ‘pioneer’ charities that formed the Almshouses Consortium Ltd. to handle the distribution of the whole of the HCA grant allocation for almshouses in the current cycle. The formation of the Almshouses Consortium Ltd. (ACL) has previously been chronicled in the Gazette.

At the stage of joining the Almshouses Consortium our funds were at their lowest and we could not afford the joining fee of £1000. This was rather daunting as our budget was to spend in excess of £450,000!! At the first exploratory meeting of ACL we were encouraged by Patrick Wilde to take up an interest free loan from the NAA in order to give us some working capital, this we did and eventually took up £60,000 in borrowings from the NAA. We have been very grateful for this and all the help and advice we have received. Also we were greatly encouraged and advised by the other members of ACL, and we have found this a very useful forum for the exchange of ideas and information.

In 2012 we launched our Local Appeal to our tiny community – the population of Alford is just over 3000 – and we have been humbled by the tremendous level of support we have received and this can be easily demonstrated by the figures – the Appeal has raised, to-date, £72,864, to which can be added a private loan, under most favourable terms, to underwrite the last £50,000 needed.

In addition to the HCA Grant and the NAA loan already mentioned, we have been supported by – The Dunhill Medical Trust, The Garfield Weston Foundation, The Sylvia Waddilove Foundation, The Quaker Housing Trust, and East Lindsey District Council.

In March 2013 we had our first ‘Contract Team’ meeting where the trustees explained to the Architect, QS, CDM co-ordinator our position of some confidence that we would be able to achieve the goal of finding enough financial support for the Scheme and that we could move to the next stage of preparing and issuing tender documents to suitable local contractors, always bearing in mind that the successful contractor had to make a start on site, or at least taken possession of site by late September 2013 as one of the conditions of the HCA Grant.

Subsequently we were able to appoint our preferred local contractor Taylor Pearson Ltd., and following the signing of the contract they were able to take possession of site on 24th September 2013. Work progressed smoothly without too many surprises and Practical Completion was achieved on 4th July 2014. We have been very pleased with the high standard of workmanship displayed by Taylor Pearson Ltd., which complements the Grade 11 Listed status of the building.

Saffer Cooper are very proud to have been a part of this exciting scheme.