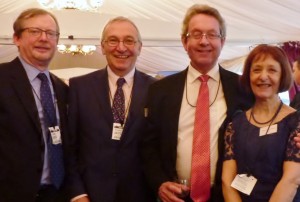 This photo captures the special day out for Reuben Saffer who was a guest of the National Association of Almshouses at their House of Lords reception attended by its royal vice patron His Royal Highness the Duke of Gloucester. Pictured (L-R) are the HCA Investment Manager for almshouses Peter Jones, Reuben, NAA Chairman Blair Gulland and the southern almshouse programme manager, Kathy Green. Reuben received his invitation in recognition of many years of working with the Almshouse movement. Of the event Reuben said, ‘It was a privilege to be party to this gathering of almshouse members and supporters, and particularly to hear Blair commend two of our schemes, Sir Robert Christopher Almshouses in Alford, Lincs and Abbots Bromley Hospital in Staffordshire’.